Guy knows his stuff.  We decided to let the kids play in the pool this morning and take it easy today.  Tonight will be worth the wait.  Until then, we chose Flagstaff and Salsa Bravo for an early dinner.  We saw the place on Diner’s Drive-ins and Dives.  MUY BUENO!!  We had our fill and headed on to the Grand Canyon once again. 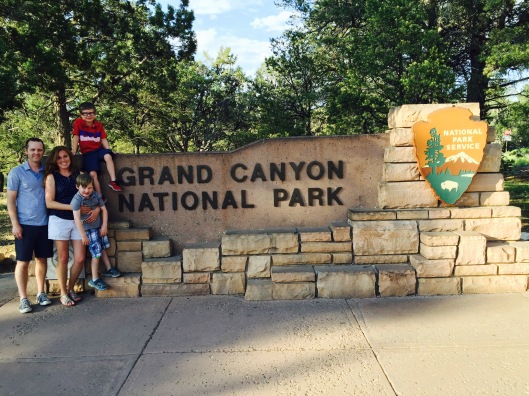 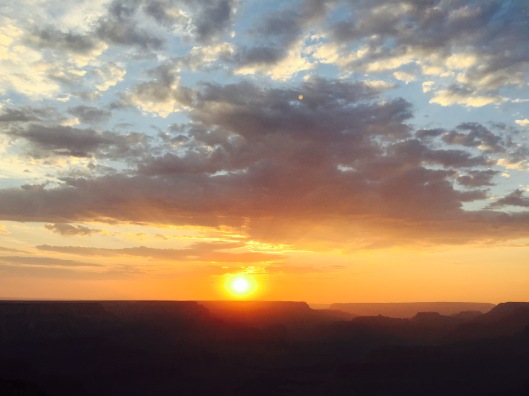 God’s light shows are the best.  My parents really wanted to see the Grand Canyon at sunset.  I’m glad they did!  What a beautiful site!  It seemed that every minute gave you a new portrait to look at.  There was a slight haze in the canyon from a fire, but I think it only added to the scene.  God’s creation truly is a work of art.  If you ever get bogged down in life and forget that God loves you and…

In the Grand Canyon, Arizona has a natural wonder which is in kind absolutely unparalleled throughout the rest of the world. I want to ask you to keep this great wonder of nature as it now is. I hope you will not have a building of any kind, not a summer cottage, a hotel or anything else, to mar the wonderful grandeur, the sublimity, the great loneliness and beauty of the canyon. Leave it as it is. You cannot improve on it. The ages have been at work on it, and man can only mar it. – Theodore Roosevelt 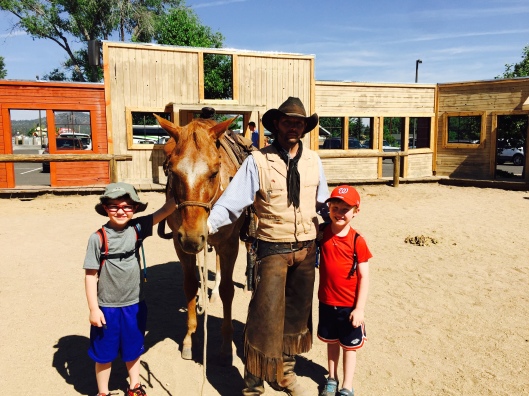 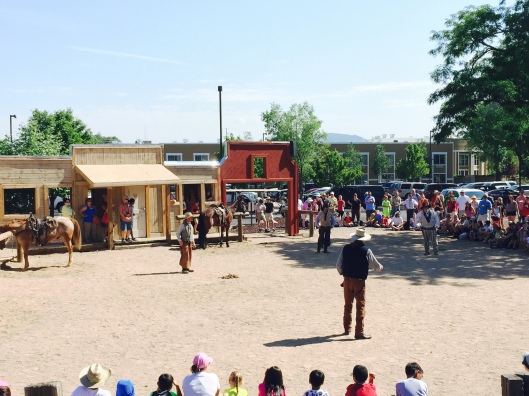 Don’t bring your finger to a gun fight.  What do boys love more than a cowboy gun fight!  Prior to our trip up to the Grand Canyon, we were treated to a cowboy show complete with a gun battle.  The boys loved it.  And even the…

Jen Turano won me over long ago with her ability to write humor into a historical fiction novel. She is now on my short list of favorites…one of my go to guaranteed good reads. This particular title was so good!!! In Good Company is Mansfield Park, meets Jane Austen all wrapped up in a romantic comedy of sorts. This is summer reading perfection!

In Good Company is the second book in Jen Turano’s A Class of Their Own series. I did read the first book, which I loved equally, but you definitely don’t have to in order to enjoy this book. I loved Turano’s character Millie Longfellow who is wonderfully flawed, spunky, and is absolutely self-aware. Her position as a nanny lands her in the household of Everett Mulberry (Mr.Darcy if you know what I mean) as part of the help. Everett is desperate for Millie’s assistance as he has become the guardian of three rather difficult children who may very well ruin his relationship with a lady of high society. His future is set…until his heartstrings pull him a different direction.

In Good Company will make my list of favorites this year. As soon as I finished it, I download yet another book by Turano. Five stars from this book blogger! I received a complimentary copy of this book by its publisher. All opinions are my own and I have not been compensated.

Ryan McKinley has tried to move on from his ex-wife, Abby. He’s sulked, he’s gotten angry, and ultimately he bought her dream house. Big mistake. Living alone in the massive 2-story has only made him miss her more. When her parents call him out of the blue about their anniversary party in Summer Harbor, Maine, Ryan believes God has dropped a golden opportunity straight in his lap.

Then Ryan shows up on her doorstep, looking as devastatingly handsome as ever. When he insists he’s going to Seabrook, with or without her, Abby knows she can’t say no. Her parents still think they’re married and now Ryan knows it too. Besides, he only wants to check in with his best friend from college-her cousin Beau, who just lost his dad. It’s just a one-week road-trip with the man who broke her heart. What could possibly go wrong?

I absolutely loved this book!!! My husband and I are on a cross-country trip so I have much time in the car to pass. I easily read Married ‘till Monday in just a few hours. Denise Hunter is a gifted storyteller and I never miss a chance to read one of her books. They are always a guaranteed good read. This title was no exception.

Married ‘till Monday is the last book in author Denise Hunter’s Chapel Springs Romance Series. I have only read one other book in the series, but I did not feel lost at all in this story. In fact, I am anxious to go back and read the other books I have missed because this one was so good. In Married ‘till Monday, Denise Hunter does a magnificent job of writing relationship and emotion. Her characters, Ryan and Abby, spend a great amount of page time together. I love the way she brought the characters along in a believable and interesting story that left me unable to put this book down! This is the perfect summer read. Five stars from this book blogger!

I was given a complimentary copy of this book by BookLookBloggers in exchange for an honest review. I have not been compensated in any way.

Bestselling novelist Denise Hunter has received the Holt Medallion Award, Reader’s Choice Award, Foreword Book of the Year Award, and is a RITA finalist. She lives in Indiana with her husband and their three sons. Twitter: @deniseahunter Facebook: authordenisehunter

Read my review for Dancing with Fireflies here.

Sometimes, books remind me of other books or movies I have already read or seen. This particular title is a combination of Sisterhood of the Traveling Pants meets every version of a love story plot in a historical fiction book possible. Having said that, author Eva Marie Everson based Five Brides on a true story. So in this book, the dress is the pair of blue jeans shared by a group of women who have crossed paths in the 1950’s. They are all looking for their dream job or better yet…their knight in shining armor.

Overall, this was a delightful read. I enjoyed reading several stories wrapped into one, where each intersects to another. The bonus was almost five happy endings…almost. I also admired the idea that each woman in the story had a bump in the road to her happiness. They gave up desired location, career, and for others, the ideal happy ending.

If I had one critique of this title, it would be the blurry line between the personalities to the women. It must be difficult to write about five women and not have them seem similar. I did not always feel they had five distinct personalities. This book really could have been a series of five.

I was given a complimentary copy of this book by its author in exchange for an honest review. All opinions are my own and I have not been compensated.

More of our Out West Adventure!

We pulled in late Wednesday night. Also our campground’s wifi is super slow. So tonight I’ll be a day behind.

Day 6 – Over the Mountains

My wife is not part of the Audubon society. Before we left the Black Hills, Jennifer was wondering what alarm was going off. It was loud and it happened at regular intervals. She didn’t believe it was a bird until I showed her. Noisy sucker.  If you want to hear it click HERE.

11 hours with windy roads is harder that 14 hours with straight roads. The last bit of our treck was through Yellowstone. It is 2 lanes. Slower. Lots of cars. It winds. And it has some fun decents. I was exhausted by the time we got to our campsite.

Pull-through sites do not mean easy sites. I pulled into the site and realized one of my hoses…

Karen Witemeyer is no doubt one of my favorite historical fiction authors to read. She writes novels that are well-paced, full of charming characters, and story lines that leave you turning the pages long into the night. A Worthy Pursuit is another wonderfully written story that reminded me why I love reading her books.

In A Worthy Pursuit, Charlotte Atherton is headmistress of a prestigious school and caretaker of several of its pupils. When the school suddenly closes, she fleas in the middle of the night to protect one of her charges from a less than desirable relative. With two other students in tow, Charlotte goes into hiding. It doesn’t take long for a former bounty hunter (Stone Hammond) hired to find one of students to locate Charlotte. However, Stone quickly realizes he is on the wrong side of the fight.

I loved this book for several reasons, but mostly for the strong and likable characters of Charlotte and Stone.  While Stone is super masculine, he doesn’t fit into any stereotypes often found in fiction. Charlotte is feminine, but she also is independent and intelligent. I really enjoy the way Witemeyer gives her would be pair plenty of page time and dialogue to form a believable relationship. Further, this story is full of action and offers more than just a love story.

I am so glad I had the opportunity to read another Karen Witemeyer novel. I have never regretted reading one of her books! I was given a complimentary copy of this book by its author in exchange for an honest review. All opinions are my own and I have not been compensated.

On our trip out west!!

Today was another very long haul.  What I learned:

You can get ready in a hurry.  We woke up around 6AM, looked at the weather, and saw a line of storms headed our way.  It was a mad dash to hookup and get out before getting drenched. 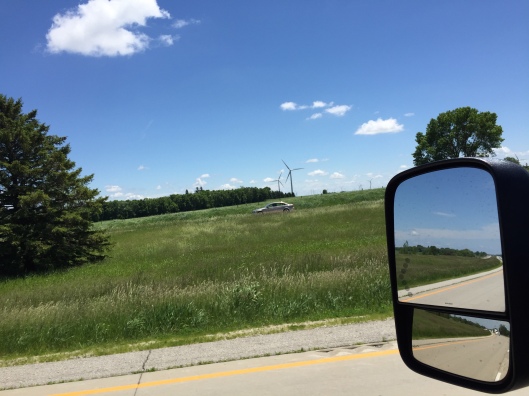 Us easterners don’t see too many windmill farms.  We went crazy!  There were windmills everywhere!  And as far as the eye could see.  We rolled down the windows and took at least 50 pictures.  To the left.  To the right.  In front of you.  Across the horizon.  Minnesota loves its windmills.  And that was just the first farm we saw.  You could tell we were from out of town.

Minnesota may love their windmills, but they hate their roads.  At first it was pleasant, then it got hellish.  I’d have to rank them down in the pits with Ohio.  I would have loved…

If there is one thing I will remember about Love’s Rescue by author Christine Johnson, it will be the many intense moments that add so much life to this novel. By no means is this a dull book with little action. Love’s Rescue is more of an action packed love story with enough anxious moments to keep you turning the pages.

In this novel, Elizabeth Benjamin is forcing her way back into her father’s life after several years away living with her cranky aunt. Elizabeth is compelled to return home and help care for her brother who was injured because of her actions years prior. She is also anxious to see the love of her life, Rourke O’ Malley. On her return trip home, she is rescued by Rourke but soon realizes their love is one of impossibility.

While I did love the action in this title…I so wanted more time spent between Elizabeth and Rourke. I think this is my common compliant about love stories. I like to read the love part and see the relationship develop. Also, there were so many times I wanted to strangle Elizabeth, and her aunt. Mostly her aunt.

Overall Love’s Rescue is a great read for this summer. You will no doubt enjoy its Key West setting and fast paced action scenes. I was given a complimentary copy of this book by its publisher in exchange for an honest review. All opinions are my own and I have not been compensated.