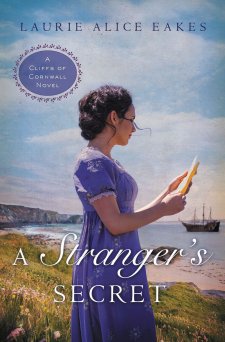 As a grieving widow, Morwenna only wants to make a life for herself and her young son at her murdered husband’s estate. Until an unconscious man washes up on her shore, entangling her in a web of mysteries that threatens everything she holds dear.

Still grieving the loss of her husband, Morwenna Penvenan fills her days preserving her son’s heritage: the dilapidated estate his father left them. But all attempts at restoration are thwarted when she is accused of deliberately causing ships to crash on her shore in order to steal their cargo. While seeking clues to the true culprits, she finds an unconscious man wearing a medallion with the Penvenan crest enameled upon it.

Upon learning of his father’s death, David pursues answers to the many questions left in his father’s wake: Why was his father in Cornwall when he said he would be in Scotland? Why did he die in possession of a medallion belonging to a prominent Cornwall family? Why did his father take money from the family’s ship-building business? And why did someone kill him? Only after waking up at the Penvenan estate under Morwenna’s care do the pieces start falling together.

As David recovers in Morwenna’s house, they grow to care about one another, while knowing each have reasons to distrust the other. The closer they work together, the more they learn how their lives—and mysteries—are entwined. As the past continues to intrude on their lives, they must learn to ask the Lord and others for help or risk losing each other and maybe even losing their lives.

Laurie Alice Eakes has written herself into my favorite historical fiction reads of 2015 with this love story and mystery by the sea. A Stranger’s Secret is riveting and full of suspense. I stayed up late last night to finish it because I could not put it down. For me, that is a mark of a great read. If a book is easily put down, than it is easily forgotten. I found A Stranger’s Secret to be unforgettable.

This title is second in Eakes’ Cliffs of Cornwall series. I did not read the first book and was able to pick up right where the book began without feeling like I was missing pieces. However, now that I am loving Eakes writing style and gift of dialogue, I am anxious to read her other books. Historical fiction has long been my favorite genre to read, but the addition of mystery really kicks it up a notch.

I love this book for many reasons, but mostly for the love story between Lady Morwenna and David Chastain. I revealed in the idea that Morwenna saw strength in David even when he was weak. I found the chemistry between them subtle at first, but then it grew naturally as I turned the pages. The tug of war of trust between them is well-played and kept me guessing even in the final chapters.

I so enjoyed reading A Stranger’s Secret. Books like this one are why I read. I was given a complimentary copy of this book by its publisher and BookLookBloggers in exchange for an honest review. All opinions are my own and I have not been compensated.

Recipient of the National Readers Choice Award, Laurie Alice Eakes is the author of nine books and a novella, with four more books and two novellas scheduled for release. She is a writing teacher and speaker and has her master’s degree in creative writing. She also writes articles on writing, including “Writing from the Heart While Writing for the Market” for The ACFW Journal. Visit her website at Facebook: authorlauriealiceeakes Twitter: @LaurieAEakes